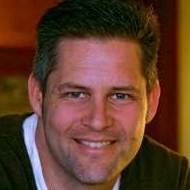 Keith Ferrin founded That You May Know Ministries and has been doing dramatic presentations of Scripture since March of 1996. Keith has presented around the United States and Europe at conferences, churches, universities, Christian schools, military bases, outreach events, and various camps and retreats. Keith graduated from Pacific Lutheran University with a degree in Psychology. He also holds a Masters of Education in Guidance and Counseling, and worked for two years asan elementary school counselor. He received dramatic training working privately with Terry Edward Moore, co-founder of the Seattle Shakespeare Festival.

Keith is the author of Falling in Love with God’s Word and Like Ice Cream and has been utilized as a speaker for retreats, conferences, outreach events, and fundraisers. His practical, humorous, and thought provoking style makes the Word come alive for audiences of all ages and backgrounds. From December of 1991 to August of 1997, Keith was a youth and worship pastor in Tacoma, Washington. Since then, That You May Know Ministries has been his primary vocation.

Keith also enjoys coaching individuals and teams in the areas of communication and public speaking. He does this through his other company - True Success Coaching, LLC.

Keith and his wife Kari live near Seattle with their three children.

6 years ago in: Gratitude no comments
Is it really possible to not be anxious about anything? (Philippians 4:5-7)

6 years ago in: Purpose 2 comments
Read the Bible in Four Months: Grow Your Understanding of Biblical Teaching

7 years ago in: Bible 13 comments
Two Simple Comments that Have Me Re-evaluating My View of God

7 years ago in: Ministry 73 comments
The Power of Words to Break or Build

7 years ago in: Relationships 15 comments
A Childhood Lesson Guaranteed to Help You Enjoy the Bible

8 years ago in: Purpose 16 comments
The Frustrating Cycle (And Why I Am Grateful For It)

8 years ago in: Ministry 70 comments
10 Tips for Liking the Bible (Because Believing It's True Is Not Enough)

8 years ago in: Purpose 32 comments
What the Prophets Have In Common with My Mirror